This research is supported by you, our readers, through our independently chosen links, which earn us a commission. Learn More 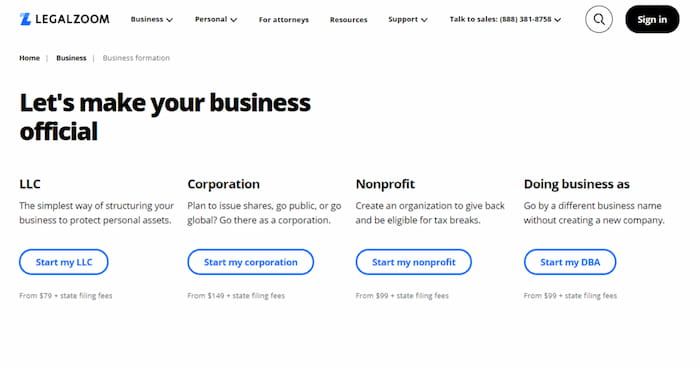 If you're looking for a convenient business formation service, you’ve probably stumbled upon LegalZoom. This company has been present on the market for the past decades and seems to be one of the industry leaders.

But does it perform as its advertisements say?

Well, you can read our detailed LegalZoom review right below and see whether it’s worth it!

History and Reputation on the Market

LegalZoom has operated since 1999 and has an impressive track record since then. They presented themselves as ‘disruptive innovators’ meaning that their mission is to revolutionize the current market of legal services by adding automatization and technology.

And they pretty much succeeded:

In 2011, LegalZoom landed 27th place in the Business Insider rating of the most valuable start-ups. A year later, in September 2012, LegalZoom partnered with QualitySolicitors, a UK-based legal service provider.

The most recent LegalZoom’s milestone so far was their first UK acquisition in 2015. They acquired Beaumont Legal, a conveyance firm based in Wakefield, West Yorkshire.

As you can see, the media presence is one of the most potent points of LegalZoom.

However, user reviews are mixed. For example, Trustpilot gives the company an average rating of 3.6 with 47% of reviews being ‘excellent’ and 46% being ‘bad’.

Google Maps shows us 423 reviews with an average rating of 3.9 and the majority of reviews being positive.

This leaves us no other option except checking LegalZoom by ourselves, which we will do right below!

Also, you can get a professional attorney consultation via LegalZoom. They gathered a network of professionals in different legal fields, so you can always count on detailed guidance or expert opinion.

And, as a cherry on top, LegalZoom has an article center, which is available for everyone. So if you want to educate yourself on a certain topic, you might go there for answers.

If all this selection of features doesn’t seem enough for you to make LegalZoom stand out among others, here’s a quick peek at some unique advantages of this service:

Now, let’s talk about the most essential part of the LegalZoom review:

How much will their services cost you?

Aside from the basic packages, LegalZoom offers you a bunch of corresponding features and add-ons.

And this is the tricky part because some of these services are essential, such as a registered agent and compliance, but they aren’t included in any package. So you have to purchase them separately, which adds a lot of expense to what is already a bit overpriced.

Anyway, let’s take a look at what LegalZoom has to offer:

That’s a lot of upsells, and navigating through them to the checkout page may seem a bit annoying for some. However, if you want a service that manages all the tedious paperwork for you, you might want to spend extra money.

How Does LegalZoom Compare to Other Services?

Finally, let’s see if LegalZoom will stand a chance against other business formation services available on the market:

As you can see, LegalZoom stands out for its expertise and track record, and if these are the qualities you look for in a business formation service, it’s worth checking them out.

Okay, that was a lot of information, but our LegalZoom review is close to the end, so let’s clarify, who should choose this service over the others, and who might want to look for other opportunities?

Well, you will probably benefit from LegalZoom if:

You may want to search for another provider if:

You need a cheaper service. LegalZoom is more expensive than the majority of similar services, and you still have to pay for some features, such as registered agent service or compliance, which adds over $500 per year to the initial price.

LegalZoom is present in the media for almost two decades now and has millions of successful business launches, which proves their reliability.

How quickly will LegalZoom process my order?

To be fair, LegalZoom is one of the slowest services when it comes to formation speed. Their basic Economy package will have you waiting for 30 business days (6 weeks). The Standard package is two times faster and will register your business in 15 working days (3 weeks). The Express Gold package is the fastest (7-10 working days).

The good news is that the formation speed is tied rather to the package you select than to the actual state requirements, so if you want to speed it up, just choose the Express Gold package.

Yes, LegalZoom operates in all 50 states.

Does LegalZoom offer any discounts?

No, LegalZoom doesn’t have any discounts or promo codes, although we think that it would be useful, regarding the company’s pricing.

Does LegalZoom have refunds?

LegalZoom has a 60-day money-back guarantee and will provide you with a full refund within this period, no question asked. Plus, they offer a 10-day trial period for their additional services, and you can cancel it anytime.

So, let’s wrap up our experiences with LegalZoom.

This service is a bit of a mixed bag: it has a long-term history on the market and an impressive track record, but its pricing and a lot of hidden services that can wind up your final price are a bit upsetting.

However, if you’re looking for a company that will help you register your business quickly and offer solid services to keep it running and maintain good standing with the state — there are almost no alternatives to LegalZoom.